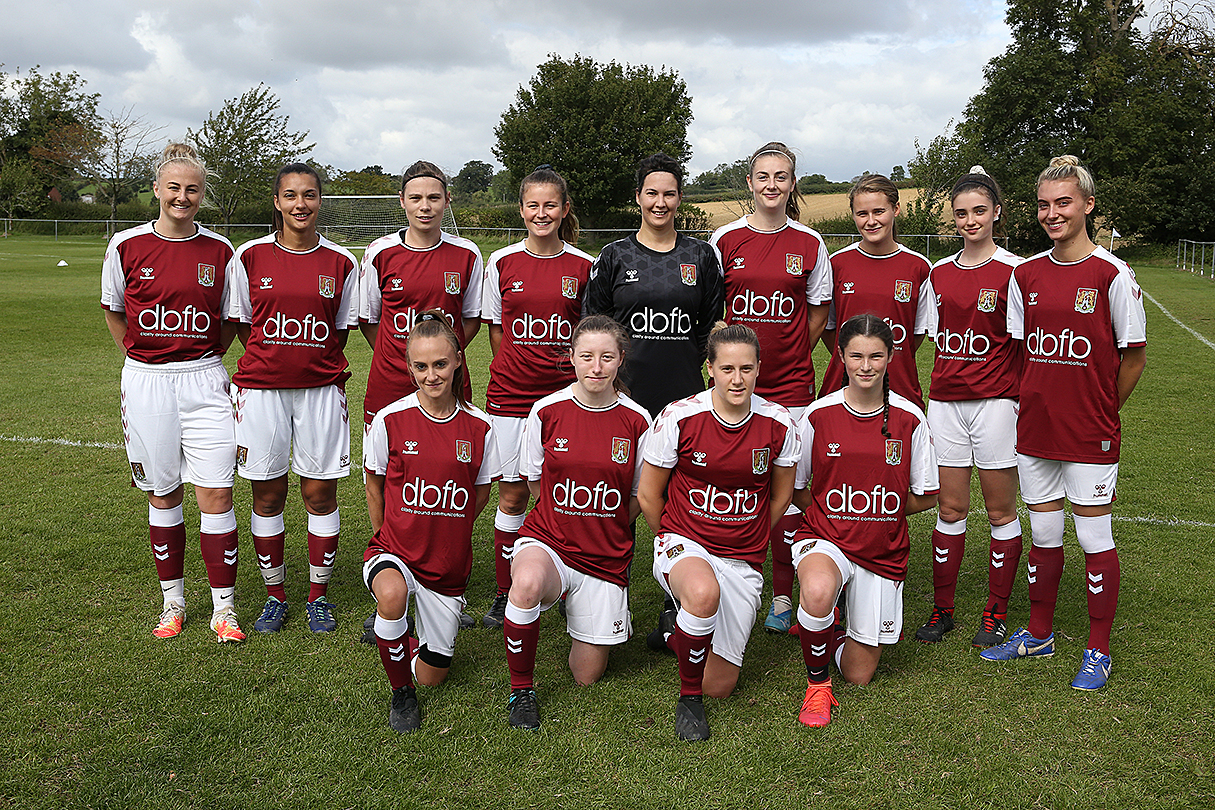 Jo Daniel (Goalkeeper)
Jo joined the Cobblers aged 21 in 2015 initially as an outfield player before swiftly finding her way into goal and has been ever present since and she is now in her 6th season.
Sponsor: 4th Corner Landscaping

Cesca Partridge (Centre forward)
Cesca signed for the club at the age of 14 after playing for her local team for 8 years. Now 22, Cesca has scored plenty of goals in her 8 years with the club!
Sponsor: Renco Ltd

Eden Brown (Centre back)
Team Captain Eden joined the club aged 8 and played with the club for 10 years before pursuing her dream of gaining a scholarship in America. After returning from America and after brief stint at Corby Town, Eden returned to the club in 2020.
Sponsor: Mind & Fitness Revolution

Bianca Luttman (Centre back)
Bianca has been playing football since the age of 4 and spent most of her youth career in the MK Dons girls pathway before having spells at MK City and City Belles in Milton Keynes. Bianca then joined the Cobblers in 2020 and has been ever present since.
Sponsor: Absolute Allows MK

Abbie Brewin (Centre midfield)
Abbie joined the club from a brief spell at Moulton in 2019 after she had spent the previous 3 years playing for Loughborough University.
Sponsor: Its All Cobblers To Me

Abbie Reboul (Wing back)
Abbie came through the player pathway at the club from the age of 14 within the player development centre before joining Blisworth Ladies where she had a successful season winning the league before joining the Cobblers again in 2018.
Sponsor: Container Cabins

Alex Bartlett (Centre midfield)
Alex has been with the Cobblers since 2018, having joined from Thrapston Town. Alex has gone on to be named Club Captain.
Sponsor: Robinson Builders

Leah Cudone (Forward)
Leah first played for the Cobblers aged 16 before moving on with successful spells at Leicester City, Watford and MK Dons. Leah then rejoined the Cobblers in 2020.
Sponsor: Steve Horsley Motors

Emma Billenness (Wing back)
Emma has been with the club since the age of 8 having come through the player pathway.
Sponsor: Zukeo

Aimee Smith (Wing back)
Aimee Smith originally joined the Cobblers at the age of 14 and played up until the age of 18 within the ladies team, after some time out of football while at University she rejoined the club in 2019.
Sponsor: Available to sponsor

Fay Noble (Centre midfield)
Fay played for Northampton Town from the age of 7 for eleven years before going off the play for Nottingham Trent University. Fay then rejoined the Cobblers on her return!
Sponsor: Northampton Town FC Community Trust

Sara Wait (Centre back)
Sara joined the club after 6 years at Kettering and another two years at Moulton. Sara is now in her 5th season at the heart of Northampton Town's defence.
Sponsor: MSF

Gracie Williams (Forward)
Gracie started her youth career at the club before continuing with Leicester City into senior football. Gracie then returned to the Cobblers in the summer of 2020.
Sponsor: Williams Alder Estate Agents

Charlie Cooper (Forward)
16 year old Charlie has made the jump into senior football for the first time this season after having a very successful youth career in local football.
Sponsor: Trapp’d

Naomi Dauncey (Defender)
Versatile Naomi is in her 5th season with the club after joining from Raunds Town.
Sponsor: 3S Northampton

Georgia Tear (Midfield)
Georgia has been with the club since she was nine years old emerging through the Centre of Excellence. Georgia has played a big role in the progression of the side over the last few years and is an integral part of the team.
Sponsored by Brittany Tear Hair

The Northampton Town Women's team play in East Midlands Women's Football League, and were promoted to the Premier Division ahead of the 2019/20 season.

For more information about Northampton Town Women, please email Sophie.Mullett@ntfc.co.uk or call on 01604 683726, home matches are played at Harpole FC.

The Northampton Town Community Trust hold regular Skills Centres in Northampton for girls aged 8-14 who are currently playing grassroots football. These are held during term times in the football season.

These sessions are run by our Academy coaches and you can turn up and pay on the day with the price £5, the first session is free.

Players who impress will be invited to join our Girls Elite Player Development Centre.

For players who are not currently playing in a grassroots team but would like to get involved then the Trust have several Wildcats Centres aimed at girls aged 5-11 in Duston Sports Centre on Thursdays from 6.00pm - 7.00pm and at Wellingborough Wrenn School on Fridays from 5.30pm -6.30pm.

If you would like more details or to register, please email Sophie.Mullett@ntfc.co.uk