Northampton Town Football Club turn 125 years old next week, and preparations to mark the milestone are well under way.

Among the events planned for the year are the special birthday game against Tranmere Rovers on Saturday, a special charity legends and celebrity game in April and an official 125 dinner in September.

As part of their preparations for the milestone, the club have been looking closely at its history, and has uncovered some media evidence that changes the club's date of formation slightly.

There was a report in the Chronicle & Echo on March 6th 1897 (below) announcing a meeting that was scheduled for March 9th 1897 to discuss the formation of a town association football club, and from that meeting the Cobblers were born. 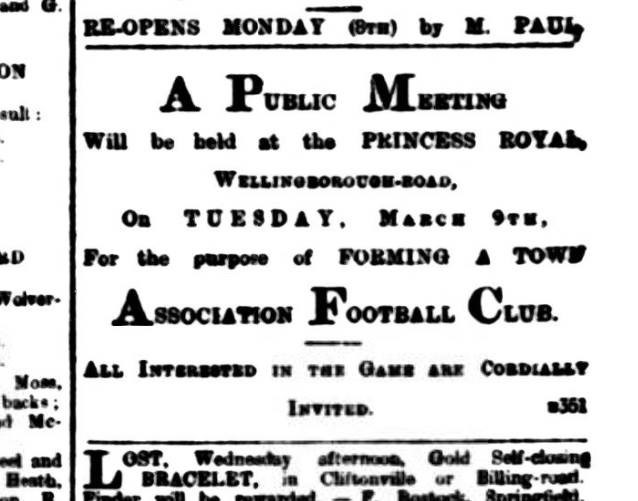 "It has been a fascinating time, looking back through our history," said Chief Executive James Whiting.

"Thanks to the work of Ethan Grande, Tim Hickling and others, we have uncovered some wonderful stories, photos and anecdotes.

"It has long been accepted, certainly since way before any of our time, that the club was formed on March 6th 1897, but we now believe the actual date may have been March 9th 1897 and we will amend our official records accordingly.

"I am led to believe it is far from unusual for an organisation to have a slightly different date of formation to what has been the long accepted wisdom, indeed I believe some organisations may be years out so to be a few days is not something we should be surprised by, but after speaking with fans on the supporters working party, we agreed we should take this opportunity to correct our date of formation.

"I would like to thank those supporters and historians who have worked so diligently to help us look in to our history in so much detail. When you take the time to do that you realise what a wonderfully rich and varied history this club has."