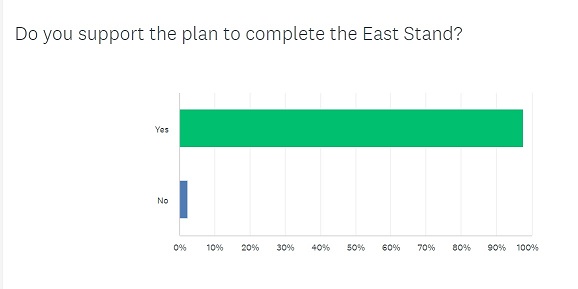 "I would like to thank everyone who took part in the poll and it is very pleasing to see that the vast majority of people support the plans," said Chairman Kelvin Thomas.

"The supporters of Northampton Town have seen the information, came and spoke to us at the Open House and have now shown their public support for the club's plans by a huge majority.

"The results back up what we as a club have seen consistently when we have gained feedback from our supporters. They back the plans and they understand that it is in the club's best interests that matters move forward as soon as possible.

"This is an overwhelming result from a big cross section of the club's support and it is a clear mandate.”

Tom Cliffe, the democratically elected supporters representative on the club's board of directors, added: "I have now seen how hard the club has been working to move things forward and the club has done as much as it can by getting an agreed deal.

"I have spoken to so many fans since being elected and also spoken to Councillors and other stakeholders and this result underlines the strength of feeling there is. It is clear the position the fanbase has, especially now they have been asked what they think.

"Matters are now in the hands of the Council and their processes but the club and Northampton Town supporters are keen for this to be concluded as soon as possible."

PLAYED FOR BOTH: SUTTON UNITED


We take a look at the few players who have represented Northampton Town and Sutton United in the EFL.


Northampton Town have signed Blackburn Rovers defender Tyler Magloire on loan for the rest of the season.