A last-gasp Andy Williams winner saw the Cobblers kick off 2020 with a 1-0 home win over Stevenage before attention quickly turned to the Emirates FA Cup and a third round tie away at Burton Albion.

On a remarkable afternoon at the Pirelli Stadium the Cobblers turned in a terrific performance to turn over the League 1 side 4-2.
Nicky Adams, Ryan Watson, Charlie Goode and Sam Hoskins were all on the scoresheet to set up a fourth round tie at home to Derby County later in the month.
The Cobblers maintained their focus as they returned to league action the following week and despite falling behind goals from Sam Hoskins and Andy Williams secured a 2-1 win at Salford.
In player news, Paul Anderson signed a contract extension until the end of the season while Billy Waters joined Newport on loan. Egli Kaja’s contract wasn’t renewed but the winger remained at the club to continue his rehab work after picking up an injury.
In the week building up to the Derby game the Cobblers continued their good form with a crushing 4-1 home win over Morecambe before picking up a point on the road at Leyton Orient.
Paul Anderson, Ryan Watson, Nicky Adams and Chris Lines scored against the Shrimps with Watson also on target in East London to put the Cobblers 1-0 up at half-time against the O’s.
Josh Wright’s 85th minute penalty and subsequent sending off of Scott Wharton and James Dayton meant a somewhat frantic end to the game but 1-1 was how it finished.
72 hours later and under the lights and in front of the BT Sport cameras at the PTS the Cobblers held Derby County to a goalless draw. Town more than matched the Championship side who included former England and Manchester United striker Wayne Rooney in their line-up and thoroughly deserved a second bite at the cherry.
The replay would take even more significance when the draw was made with a home round tie against Manchester United awaiting the winners.
Amidst a hectic run of games on the pitch the Cobblers were also busy off it and there were three new signings made before the next game. Winger Mark Marshall was the first to arrive on a contract until the end of the season and he was quickly followed by the double loan signing of Arsenal midfielder James Olayinka and West Brom striker Callum Morton.
Defender Lloyd Jones was also signed on loan from Luton on deadline day.
Before that though the Cobblers rounded off an excellent month with a 3-0 home win over Scunthorpe. Vadaine Oliver struck early and after the Iron saw former Cobblers striker Kevin van Veen dismissed Oliver added a second with Sam Hoskins wrapping things up from the penalty spot.
How the league table looked at the end of the month: 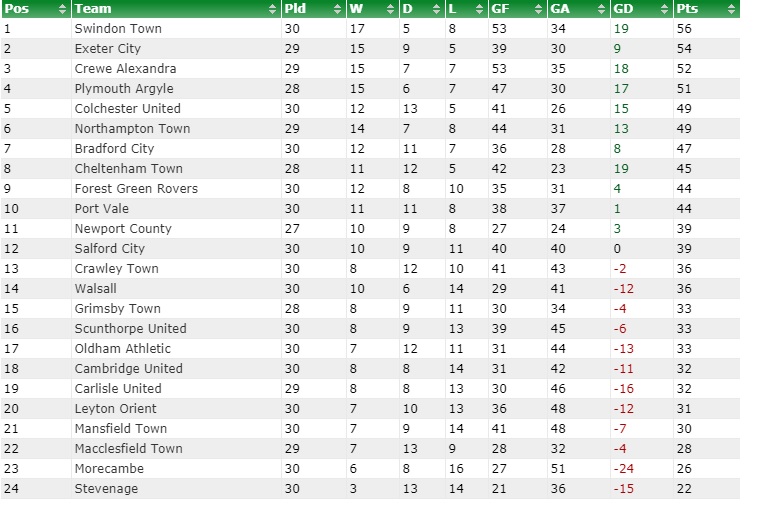