There was a very poignant match at the PTS Academy Stadium in early October as the Cobblers and Leyton Orient met for the first time since the tragic passing of Justin Edinburgh last summer.

Edinburgh managed both clubs and only the previous season had guided the O’s back into the EFL.
James Brophy’s goal on 57 minutes gave Orient a 1-0 victory on a day where football once again paid their respects to Justin Edinburgh.
Switching away from league action Harry Smith was on target as the Cobblers won 1-0 away at Cambridge in their final Leasing.com Trophy group fixture.
Back to the league and the Cobblers suffered a 3-0 defeat at Scunthorpe with former striker Kevin van Veen adding to a Lee Novak quickfire double.  To make matters worse Vadaine Oliver was sent off in the second half to compound a miserable afternoon. That red card was later overturned on appeal.
3-0 down with just over half an hour played at Glanford Park, that result has since proven to be somewhat of a watershed moment in the Cobblers season with Keith Curle revealing there were some honest and frank discussions with the squad following the defeat.
Three consecutive 2-0 wins followed against Salford, Carlisle and Cambridge.
Sam Hoskins from the penalty spot and Jordan Turnbull scored against league newcomers Salford at the PTs before a midweek away win at Carlisle saw Scott Pollock score his first ever goal in professional football.
Hoskins wrapped things up against the Cumbrians with a goal late on and Harry Smith then netted a brace against Cambridge to make it a perfect week to end the month.
In other news in October winger Paul Anderson returned to the club on a short-term contract while former manager Ian Sampson was appointed as the club’s new academy manager.

This was how the league table looked at the end of October: 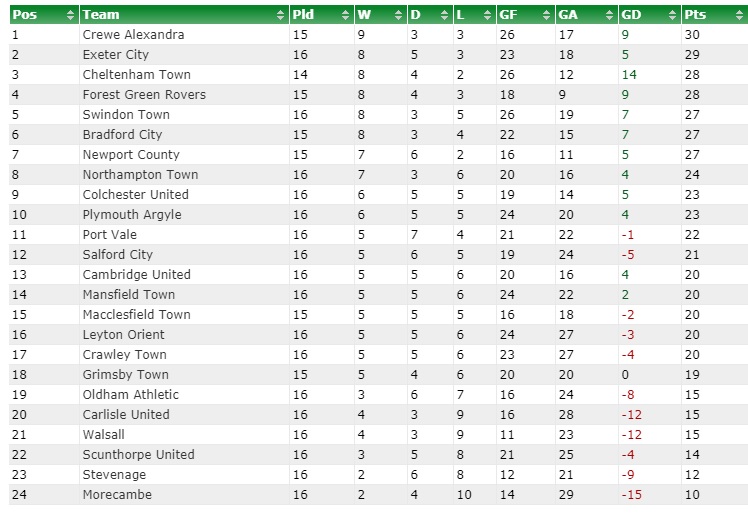