After ending October with three wins on the bounce, November started with a trip to Oldham and it was another frustrating afternoon for the Cobblers who led 2-0 before being stunned by two late goals.

Andy Williams' goal on 80 minutes added to Matt Warburton’s early tap in but the Cobblers were pegged back late on.

Scott Wilson pulled a goal back for the Latics on 85 minutes and Jonny Smith then made it 2-2 with a cross/shot that was cruelly deflected past David Cornell.

In a break from the league the Cobblers then kicked off what would prove to be a fantastic run in the Emirates FA Cup with a first round tie at Chippenham Town.

Vadaine Oliver bagged a brace and Harry Smith was on target in a 3-0 victory with all the goals coming in the first half.

Back to the league and the Cobblers beat promotion chasing Crewe Alexandra 4-1 at the PTS, perhaps one of the most impressive results of the campaign.

Scott Wharton scored twice before Sam Hoskins netted from the penalty spot as the Cobblers raced into a three goal lead and although Chris Porter pulled a goal back for the Alex before half-time Andy Williams completed the scoring with a delightful chip on 56 minutes.

That result moved the Cobblers into the top seven and they maintained their place in the play-offs with a 2-0 home win over Grimsby in their final game of the month, Scott Wharton and Vadaine Oliver on target.

How the league table looked at the end of the month: 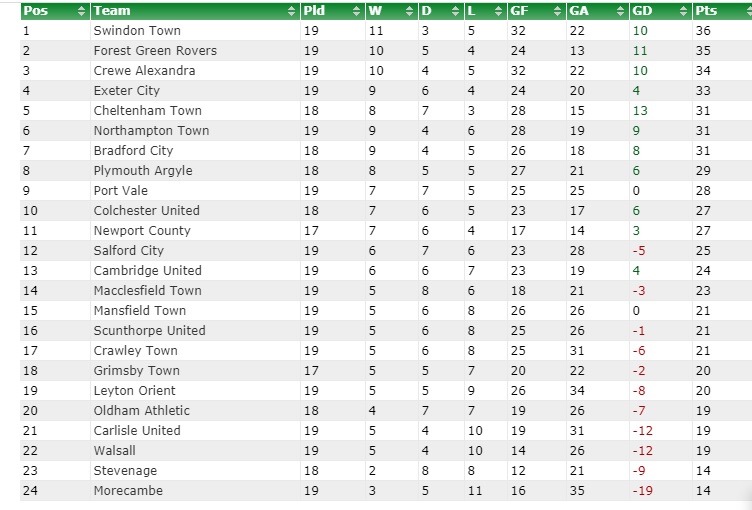