Northampton Town Football Club have issued the following response to comments made by Councillors Phil Larratt and Tim Hadland in the Chronicle & Echo. These quotes formed the club's full response which was made available to the Chronicle & Echo, as was the letter below.

“We are very surprised by the comments of Cllr Larratt and Cllr Hadland and can only assume they have not been fully briefed on this matter.

“We have been working hard with the officers at NBC and the letter below - sent to the club on the 27th January 2020 by NBC Chief Executive, George Candler - shows the true position. This clearly shows that the club have sent proposals to the Council which have not only been considered, but the Council also has a favoured option, which is a deal including the entire site.

“Following the letter, the club has been waiting for the Council to complete some due diligence work, which in fairness we have now been informed has basically been completed and will be discussed internally at the Council this week. We would then expect to meet the Council again in the next week or so.

“We have always stated that the completion of the East Stand was the main focus in any development or discussion, but clearly it is very important for the sustainability of the Football Club to ensure that the Football Club utilises all of its assets to move forward, including the old CDNL land which is now owned by the Football Club.

“We can all get carried away with sensational headlines or negative agendas by some, but the facts remain that the Football Club is working hard with the Council and we will continue to do so in a professional manner until told otherwise.” 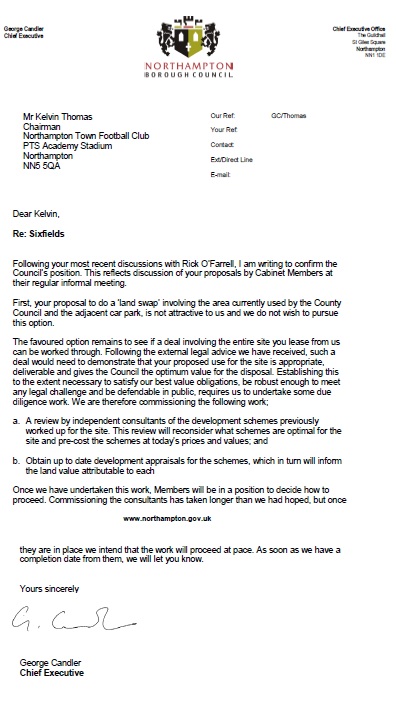