Northampton Town have signed Luton Town defender Lloyd Jones on loan for the rest of the season.

During his time at Anfield, when he captained the reserve team, he enjoyed loan spells at Cheltenham Town, Accrington Stanley, Blackpool and Swindon Town, making well over 50 appearances, mostly in League 1.

In January 2018, Jones joined Luton Town for an undisclosed fee, and spent time on loan at Plymouth Argyle last season. This season, he has regularly been in Luton Town's 18 man matchday squad in the Championship.

"Lloyd is a good defender who we think is an excellent fit for us," said manager Keith Curle.

"He is a dominant centre back, he can play anywhere across the back three and he can handle the football too, being able to step out and join in with play.

"He is a player who is a good size, he likes to defend and he has good technical ability.

"He is dominant in both boxes, he is a goal threat at attacking set plays and he has a decent amount of experience in both League 1 and League 2 so he can hit the ground running. Just as importantly, we think he will fit in well with the excellent dressing room environment we have at the club." 
There was a very poignant match at the PTS Academy Stadium in early October as the Cobblers and Leyton Orient met for the first time since the tragic passing of Justin Edinburgh last summer. 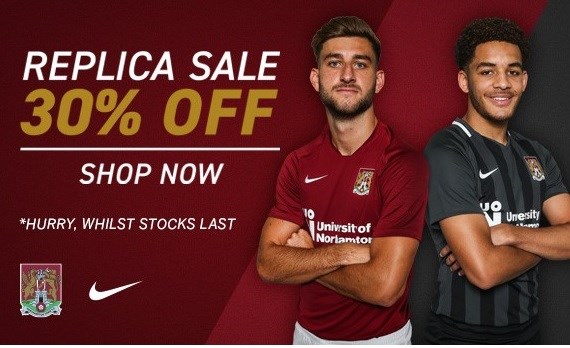 
Please note, to ensure the health and safety of staff and supporters, and in keeping with the latest Government advice, the club store's click and collect service is suspended until further notice. 
The 5-aside managers have spoken, and below are the most picked players by you for an #UltimateCobblers5aside team... 
The FA, Premier League, EFL and women’s professional game, together with the PFA and LMA understand we are in unprecedented times and our thoughts are with everyone affected by COVID-19.