The Cobblers Emirates FA Cup run continued in December with a 3-1 home win over Notts County kicking off the month.

Scott Wharton scored for the fourth time in three matches to open the scoring before Vadaine Oliver and Harry Smith made it 3-0. Kristian Dennis pulled a goal back for County late on but the Cobblers were through to the third round. Their interest in the Leasing.com Trophy was however ended following a 2-1 defeat at holders Portsmouth.

Wharton’s impressive form saw the on-loan Blackburn Rovers defender named PFA League 2 player of the month for October while Keith Curle was nominated for the Sky Bet League 2 manager of the month award.

At the end of a tough opening week which encompassed three games in six days, the Cobblers were beaten 3-2 at Exeter.

It was 1-1 at half-time after Randell Williams cancelled out Charlie Goode’s opener but two goals in two minutes in the second half from Aaron Martin and Alex Fisher turned the game in favour of the home side.

Sam Hoskins set up a tense last ten minutes but the Grecians held on. The following week an own goal on the stroke of half-time sealed a 1-0 home win over Forest Green Rovers.

Into the Christmas period and the Cobblers began the festive schedule with a 1-1 draw away at Mansfield who had just appointed Graham Coughlan as their new manager.

Andy Cook put the Stags in front with just over a quarter of an hour to play but the Cobblers battled back and Harry Smith equalised on 84 minutes.

Boxing Day afternoon was not so enjoyable for Smith and the Cobblers with the striker and midfielder Shaun McWilliams both picking up severe injuries in a 4-0 defeat at Crawley.

The Cobblers last game of the decade was at the PTS against fellow promotion contenders Cheltenham Town and it was the Robins who took an early lead through Conor Thomas from the penalty spot. Jordan Turnbull made it 1-1 going in at half-time and that was how it finished.

As everyone was preparing for 2020 the club was still hard at work and on New Year’s Eve it was announced defender Michael Harriman had signed a contract extension until the end of the season.

This was how the league table looked at the end of the month: 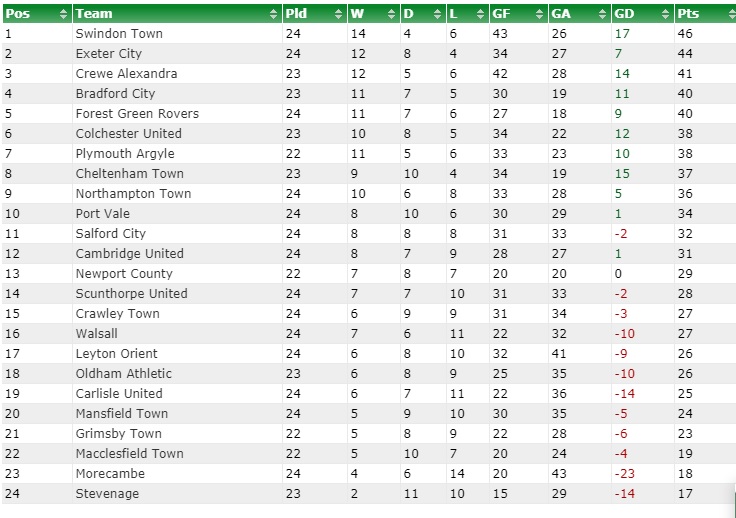