Nottingham Forest were the visitors to Sixfields on Tuesday night as the Cobblers stepped up their pre-season campaign. Jon Brady was still without a number of players who were having to self-isolate but there was a first start for trialist left-back Ali Koiki. Joseph Mills, nearing a return, took part in the warm-up.

With the thunder rolling around Sixfields on a balmy evening in Northampton, the Cobblers started on the offensive, forcing a couple of early set plays before Mitch Pinnock fired wide. Liam Roberts meanwhile made a smart save to deny Alex Mighten the opening goal for Forest, both sides starting the game at a high intensity.

A combination of a finger-tip save from Jordan Smith and the cross bar kept out Nick Kabamba’s header as the game neared the half-hour mark with Benny Ashley-Seal’s follow-up effort flagged for off-side.

Caleb Chukwuemeka replaced Ashley-Seal not long after that however with the former Wolves front man failing to shake off a knock he picked up earlier in the game.

As an entertaining first half drew to a close, Jordan Flores saw a dipping volley from 35-yards saved by Smith.

Half-time substitute Lyle Taylor broke the deadlock for Forest early in the second half with Joe Lolley subsequently almost adding a second with a strike from long range.

Chukwuemeka went close to an equaliser after being played in by Dylan Connolly, his shot on the turn whistling just wide, while the academy striker then had the ball in the net, only to be denied by what must have been a tight offside call.

Roberts saved from Mighten but Forest soon doubled their lead, Cafu with a terrific strike from outside the area.

Flores saw a shot saved by Smith before Jon Brady brought on Jonny Maxted, Sid Nelson and Michael Harriman. Liam Cross and Josh Flanagan then also came on for the final quarter of an hour.

Harriman and Connolly both went close from distance as the Cobblers continued to look bright going forward before another change saw Max Dyche replace Fraser Horsfall.

The Cobblers played the last few minutes with ten men after trialist Ali Koiki went off with what appeared to be cramp and 2-0 was how it finished.

Northampton Town Football Club looks forward to welcoming you to Sixfields for the fixture with Nottingham Forest on Tuesday (7.45pm kick off).

A funfair will be using the north gravel car park but the north overflow car park (by Nuffield Health) will be open, and the gates will open at 6.15pm. Parking will cost £4 (cash only).

Match programmes will also be on sale on arrival for £3 (cash and card), while the kiosks, bars and club store are all cashless - card payment only please.

If collecting tickets, please visit the ticket collection point upon arrival, this opens at 6.00pm. The ticket office is open until kick off (Nottingham Forest sales only for the hour before the game) and re-opens after the game while the club store will be open before the game only. 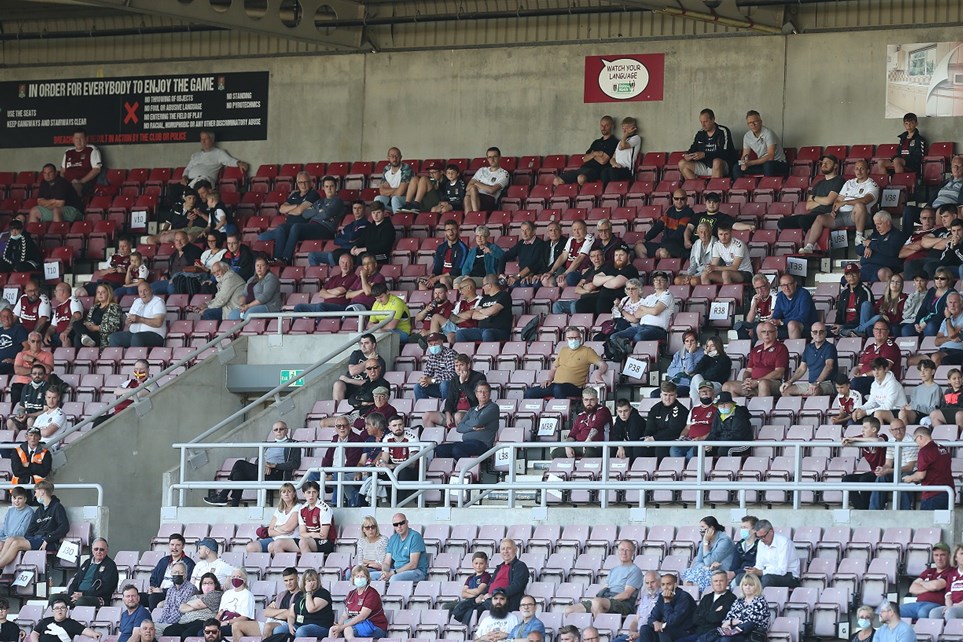 TICKETS ON SALE AS NOTTINGHAM FOREST VISIT SIXFIELDS ON TUESDAY


Following the UK Government announcement that attendance restrictions will be lifted from July 19, tickets for the upcoming pre-season home games with Nottingham Forest (Tuesday July 20) and...