Charlie Goode was back to captain the side against his former club after recovering from illness with Jordan Turnbull, suspended for the previous league game, Matt Warburton and Vadaine Oliver also named in the starting line-up. Former Cobblers striker Kevin van Veen started for Scunthorpe.

A Lee Novak header was comfortably saved by David Cornell after a quiet opening ten minutes but the Cobblers keeper was beaten soon after. A ball over the top found Novak on the edge of the area and one-on-one with Cornell, he kept his cool to put the home side in front.

Things got worse for the Cobblers when Scunthorpe doubled their lead less than five minutes later, Lee Novak scoring on the follow-up after Cornell had saved van Veen’s initial header.

Joe Martin had to be replaced by Alan McCormack after picking up an injury mid way through the first half. Warburton then had a sniff at goal but after cutting inside his man, his shot from an acute angle only found the side netting. Sam Hoskins did likewise after being played in by McCormack with the Cobblers pressing for a way back into the game.

Kevin van Veen made it 3-0 just after the half hour mark, the Dutchman curling an unstoppable shot into the top corner.

Oliver headed over from a Nicky Adams corner and Rory Watson saved a Hoskins header as Keith Curle’s side pressed for a goal before half-time, Goode also flicking a header just wide in stoppage time from another Adams corner.

Watson could only parry a shot from Williams following a good knock down from Oliver, but the latter's afternoon was ended prematurely when he was shown a straight red card by referee Trevor Kettle, after a discussion with his assistant, for a challenge on the Scunthorpe goalkeeper. The decision looked very harsh (a view backed up by video evidence) with Oliver seemingly having every right to go for the ball but the Cobblers were down to ten men.

Watson was replaced by Jake Eastwood, while Harry Smith for Shaun McWilliams was the Cobblers final change.

Despite their numerical disadvantage the Cobblers kept pressing, Williams seeing a shot deflected behind for a corner from which Smith headed wide.

Novak, looking for his hat-trick, saw his shot tipped on to the bar by Cornell late on and the game finished 3-0.

We have received an initial 630 tickets for this game, priced as follows:

Scunthorpe United operate a barcode ticket entry system, so supporters are asked to keep their tickets safe and in good condition.

Ambulant disabled supporters pay the relevant age price with a free carer ticket available if the user is on High Rate DLA for care or mobility.

Tickets are now on sale from the PTS Academy Stadium and ntfcdirect.co.uk and any tickets purchased but not collected will be taken to Scunthorpe for collection on arrival. These tickets can be collected from the collection window next to the main ticket office. 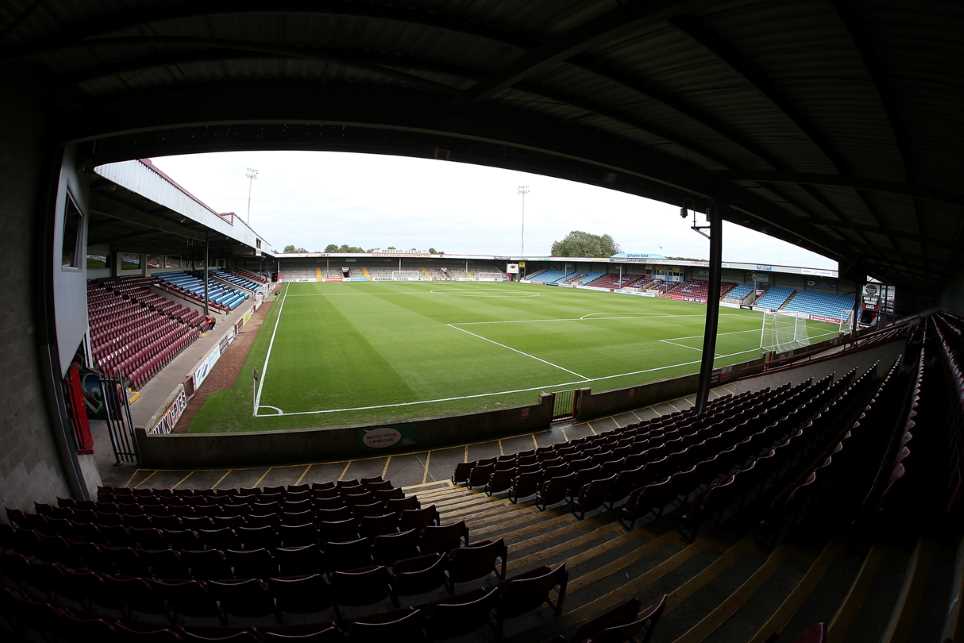