Cheltenham Town were the final visitors of 2019 to the PTS Academy Stadium with the Cobblers looking to bounce back from defeat at Crawley on Boxing Day.

Harry Smith (ankle) and Shaun McWilliams (knee) were both unavailable after being stretchered off late on in that game with Keith Curle making five changes, including a return in goal for David Cornell. Andy Williams, Vadaine Oliver, Paul Anderson and Michael Harriman also all came into the side while former Cobbler Ben Tozer captained the Robins who went into the game just one point and two places above the Cobblers in the table.

Before kick-off there was a period of applause to remember those who sadly passed away over the previous few months with tributes also shown on the big screen.

As the final Cobblers game of the decade got under way, Conor Thomas put Cheltenham in front from the penalty spot early on with Jordan Turnbull booked for bringing down George Lloyd.

Williams, on the volley, went close to an equaliser after a good knock down from Oliver while the Cobblers had their own appeals for a penalty turned down when Sam Hoskins went down in the area.

Jordan Turnbull had the Cobblers back on level terms before half-time, stabbing home from close range after Scott Flinders could only parry a Nicky Adams free-kick to Oliver and his flick back into the danger area set up the equaliser.

Paul Anderson was denied by a last-ditch challenge from a Cheltenham defender before Charlie Goode fired over on the follow-up at the start of the second half.

The Cobblers were probing and it needed a terrific save from Flinders to keep out a Watson drive while Williams curled a shot against the post.

Watson made an important challenge after Alex Addai cut the ball back to Sean Long in a rare foray forward from the visitors in the second half before the Cobblers again went close, Hoskins finding the side netting.

For the second time in the afternoon the Cobblers appeals for a penalty were turned down when Williams went over in the area in stoppage time but despite pressing hard for a winner Keith Curle’s side had to settle for a point while Cheltenham ended the game with ten men after Alex Addai was sent off for raising his hands to Charlie Goode.

Tickets for Sunday's game against Cheltenham Town at the PTS Academy Stadium (3pm kick off) are now on sale from the ticket office and ntfcdirect.co.uk

On Sunday, please visit the main ticket office if you are looking to purchase tickets on arrival.

Please note that season tickets and other match tickets are also on sale, but for the hour before kick off the ticket office will be selling Cheltenham Town match tickets only. We are expected to be very busy so if collecting tickets, please arrive early!

A win isn't the only aim on Sunday, making sure everyone goes home safe is the most important result. 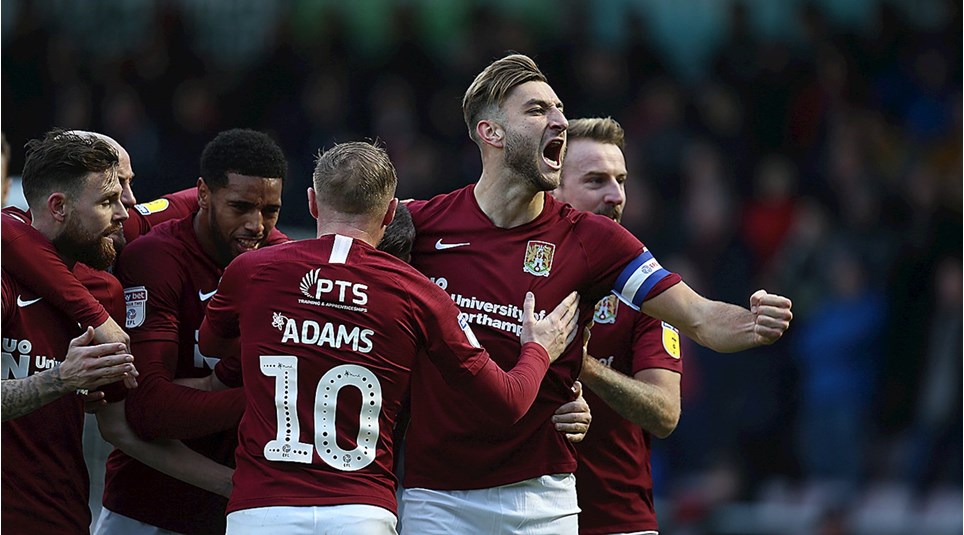 
Tickets for Sunday's game against Cheltenham Town at the PTS Academy Stadium (3pm kick off) are now on sale from the ticket office and ntfcdirect.co.uk