Following the 5-0 win at Macclesfield in midweek boss Keith Curle made two changes to the side with Sam Hoskins and Kevin van Veen coming in for Daniel Powell and Andy Williams.

Oldham started brightly, Gevaro Nepomuceno firing a shot wide from an acute angle inside the opening 60 seconds on a distinctly chilly afternoon at the PTS Academy Stadium. Nepomuceno and Callum Lang also had shots blocked as the visitors enjoyed an early spell of pressure.

John-Joe O’Toole shot just wide from 20-yards midway through the first half, van Veen teeing up the midfielder following a cross in from David Buchanan. The Cobblers were starting to build a period of pressure but with half an hour played neither goalkeeper had been seriously tested.

The Cobblers took the lead on 36 minutes and it was that man O’Toole again in the right place at the right time to provide the finishing touch to Buchanan’s cross, beating the Latics defence to score from close range with credit also due to van Veen who was heavily involved in the build-up.

Referee Charles Breakspear produced a red card for Sam Foley following a challenge in midfield as the Cobblers were reduced to ten men but Kevin van Veen had the chance to double the lead from the penalty spot before half-time and it was an opportunity the Dutchman took with aplomb.

Hakeem Odoffin replaced Jack Bridge at half-time with Jose Baxter and Ishmael Miller coming on in a double change for Oldham.

Down to ten men but looking dangerous on the break, Sam Hoskins led a quick Cobblers counter-attack, playing the ball into Matt Crooks who lifted the ball over Daniel Iversen but just wide of the Oldham goal. Town were looking comfortable despite their numerical disadvantage and Jonathan Benteke, the younger brother of Crystal Palace striker Christian, came on in what looked a final throw of the dice for the visitors.

Oldham did however pull a goal back when Rob Hunt got the final touch following a scramble inside the area to set up a nervous last 20 minutes.

First Aaron Pierre and then David Buchanan put their body on the line to deny Oldham a shot on goal while at the other end a block on the goal line prevented Matt Crooks making it 3-1 following a good break forward from Daniel Powell, who was on for van Veen.

Six minutes of stoppage time were signalled by the fourth official and the Cobblers remained resolute to claim the three points and record back-to-back wins.

Please note that tickets for forthcoming home and away games are on sale, but for the hour before kick off the ticket office will be selling Oldham match tickets only. 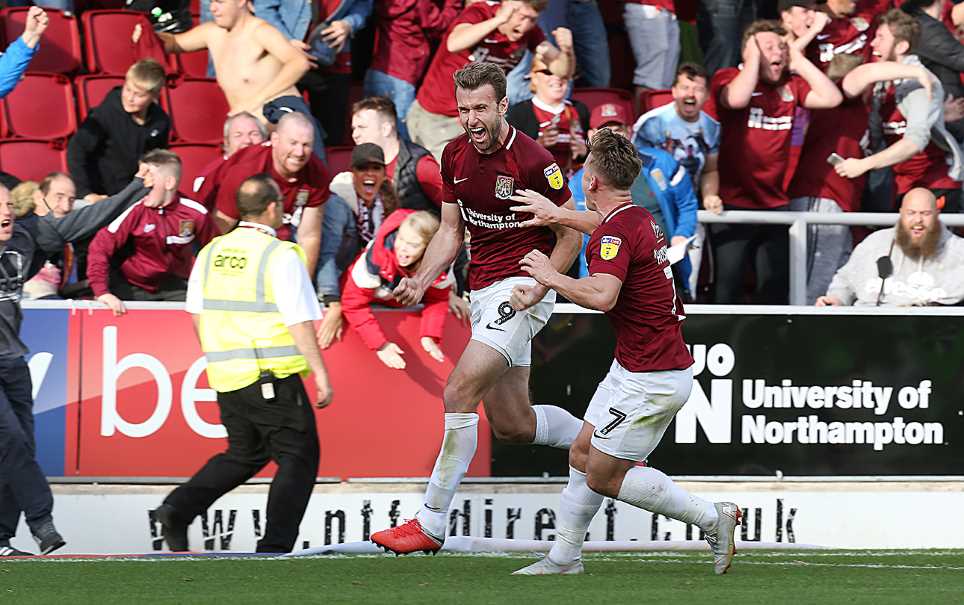