Cobblers boss Keith Curle says that while he is encouraged by recent performance, there is still plenty to work on ahead of Saturday’s home game against unbeaten Forest Green Rovers, kick-off 2pm.

“We did the basics right at Oxford but winning one game doesn’t mean there is a platform in place and we are still laying down the foundations,” he said.

“There is a framework in place but we still need to earn the right to play the free flowing attacking football that we want.

“We are still putting the building blocks in place and once we have done that we can become a little more introcate.

“We want the supporters to be a part of what we are trying to do and hopefully they will enjoy coming on board with us.

“We want to include them on the journey we’re on and the more people who get on board the wave then the longer you can ride it.”

Daniel Powell is meanwhile to be assessed ahead of Saturday’s game after being forced off against Oxford United in the second half on Tuesday. Leon Barnett, Ash Taylor and Junior Morias remain unavailable for selection.

EARLY KICK OFF ON SATURDAY


A reminder that Saturday's game against Forest Green Rovers at the PTS Academy Stadium kicks off at the earlier time of 2pm. 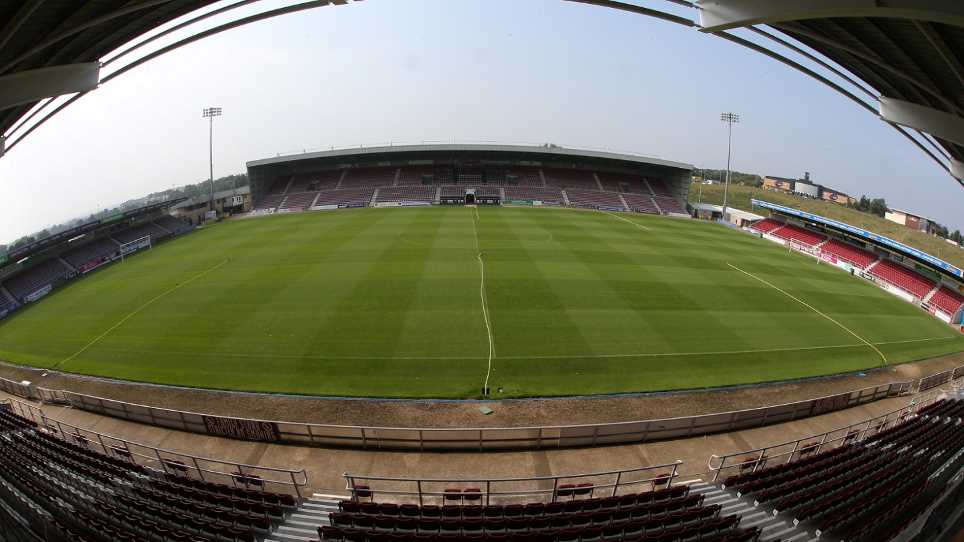 Billy Waters replaced Shaun McWilliams in the only change to the side that started in the previous league game at Swindon Town. Former Cobblers defender Lee Collins was named on the bench for Forest Green Rovers, who came to the PTS Academy Stadium unbeaten in 2018/19. The game kicked off at the earlier time of 2pm in order to avoid a direct clash with the Northampton Saints. A strong wind made conditions far from ideal for either side as the game got underway.

Matt Crooks headed wide from an early David Buchanan cross in a quick start from the hosts while David Cornell had to be at full-stretch in order to keep out an effort from Dayle Grubb in an early sight at goal for Rovers.

Robert Sanchez saved from Waters following a well-worked free-kick and a cross from Andy Williams just evaded Sam Hoskins in the box in a promising Cobblers move. Cornell made a second good save of the afternoon, this time to deny Lloyd James, before Waters fired over from 15-yards.

An accidental clash of heads between Matt Crooks and Forest Green centre-back Farrend Rawson led to a lengthy stoppage with Crooks coming off worse. The Cobblers midfielder was however able to continue after recieving treatment.

Grubb sent in a shot that kissed the top of the bar but that only proved to be a temporary reprieve for the Cobblers as Forest Green took the lead just before half-time, Reuben Reid racing through to score, the goal given despite appeals for an off-side flag.

Kevin van Veen came on for Crooks twelve minutes into the second half, Crooks having picked up his fifth booking of the season encurring a one-match ban as a result.

Sanchez made a good stop to turn behind a fierce drive from Sam Foley as the Cobblers upped the tempo in search of an equaliser.

That equaliser came in the shape of an Aaron Pierre header, his second goal in as many games coming from a Buchanan corner knocked back by Jordan Turnbull.

The Cobblers were now unquestionably in the ascendancy, Waters seeing a shot deflected behind and Turnbull heading just over from another corner. Hoskins then had a low free-kick well saved by Sanchez with Rovers somehow surviving the subsequent melay in the penalty area.

Daniel Powell came on for Waters in stoppage time as Keith Curle made his third and final change, Jack Bridge having earlier replaced Buchanan. Hoskins curled a shot agonisingly wide as the Cobblers continued to push hard for a winner which duly came deep into injury time, Andy Williams keeping his cool to finish van Veen’s excellent lay-off.

EARLY KICK OFF ON SATURDAY


A reminder that Saturday's game against Forest Green Rovers at the PTS Academy Stadium kicks off at the earlier time of 2pm.

Tickets for Saturday's game against Forest Green Rovers at the PTS Academy Stadium (2.00pm kick off) are now on sale from the ticket office and ntfcdirect.co.uk