Kevin van Veen and Hakeem Odoffin replaced Matt Crooks and Shay Facey as the Cobblers made the short trip to Stadium:MK looking to build on back-to-back wins and extend their four-match unbeaten run. Crooks was ineligible after picking up his fifth booking of the season to incur a one-match ban while Facey joined Ash Taylor, Leon Barnett, Dean Bowditch and Junior Morias on the sidelines. Joe Iaciofano joined Jay Williams and Sean Whaler on a youthful looking substitutes bench.

Rhys Healey had the ball in the back of the net for the hosts inside two minutes but the off-side flag was already up. Sam Foley and Sam Hoskins both saw shots saved by ex-Cobblers goalkeeper Lee Nicholls in a lively start from two in-form sides.

Nicholls again saved from Hoskins on 21 minutes with van Veen also having an effort blocked. MK Dons were posing a threat on the counter-attack but the Cobblers nearly took the lead from a counter-attack of their own when Andy Williams played in Hoskins, Nicholls down well to his left to make the save.

Kieran Agard fired just wide for the Dons and David Cornell made a fairly routine save to keep out a Chuks Aneke header in a couple of half chances for the home side. Cornell then had to be at his best to tip over a shot from Aneke with the Cobblers appealing for a foul on Billy Waters in the build-up.

MK Dons took the lead just before half-time, Kieran Agard getting the final touch from a corner to prod the ball home via a couple of deflections, the goal given despite some protestations from Cornell.

Alex Gilbey fired a shot just wide as the home side looked to double their lead in the second half before Shaun McWilliams and Jack Bridge came on for David Buchanan and Andy Williams, McWilliams taking the captain’s armband.

A top class save from Cornell prevented Joe Walsh making it 2-0 and the Cobblers survived moments later when the Dons failed to finish from close range after Cornell could only parry a shot from distance. Odoffin was in the right place at the right time to turn behind a shot from Healey and although Agard thought he had his second goal of the afternoon from the subsequent corner his effort was ruled out for an obvious push on Aaron Pierre.

Daniel Powell, on for Billy Waters, had a chance to equalise when played through by van Veen but one-on-one with Nicholls the Dons keeper got a touch to turn the ball behind. The Cobblers were still in the game but were nearly undone when Healey rattled the crossbar with a shot from the edge of the area.

Odoffin had a shot blocked and Sam Foley headed onto the roof of the net as the Cobblers pressed hard for an equaliser. It wasn’t to be though and despite their best efforts the unbeaten run under Keith Curle came to an end.

Tickets for this game are now on sale from the PTS Academy Stadium and ntfcdirect.co.uk.

We have been allocated an initial 1,560 reserved seating tickets in the lower tier of the North Stand.

All disabled supporters are charged the age appropriate price.

Milton Keynes Dons strongly advise advanced purchase to avoid delays but supporters can pay on arrival with no price increase (cash only). Advanced purchase ends at 4pm on Friday.

Limited parking is available at £7 per car and pre-booking is strongly recommended via ticketmonkey.eu

Free parking for up to 5 supporters coaches is offered on a reciprocal basis - additional and non official coaches will be charged £25. Please email customerservices@mkdons.com or call 01908 622901 to reserve/pay for coach parking. 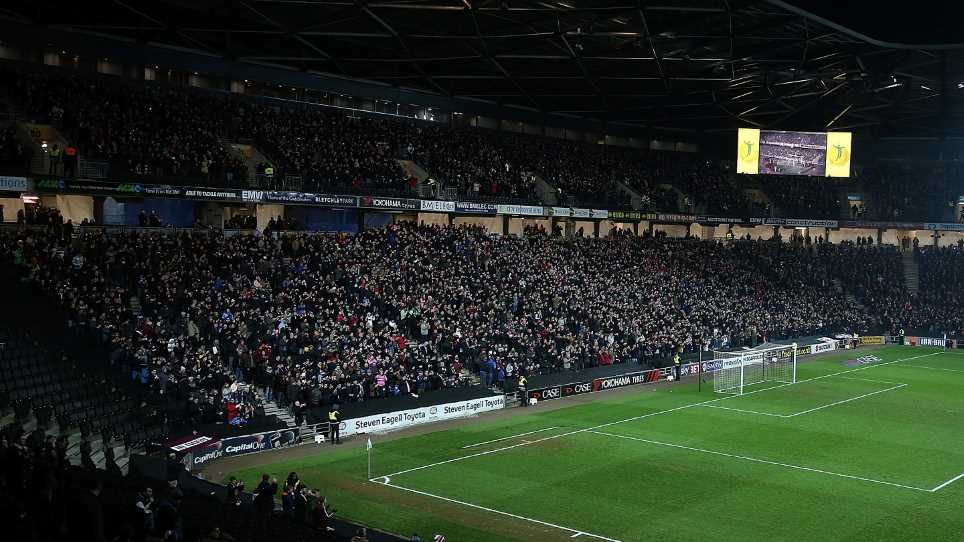