Ash Taylor, Andy Williams and Sam Foley, back from suspension, came into the side as boss Keith Curle made three changes for the visit of Grimsby Town.

The Cobblers started the game on the front foot and took the lead inside five minutes, Andy Williams with an emphatic finish at the far post after Grimsby failed to clear their lines from a corner. Credit also to Sam Foley who did well to keep the ball alive.

There was no let up in the home side’s tempo despite the early breakthrough and with their foot still firmly on the gas Kevin van Veen saw a shot blocked while David Buchanan also went close, his perfectly timed strike from the edge of the area turned behind by James McKeown.

Referee Trevor Kettle was unmoved as he waved away the Cobblers appeals for a penalty for first handball and then for what appeared to be a foul on Ash Taylor before a fine first-time strike from Hoskins whistled just wide from 20-yards, the Cobblers looking hungry for a second goal.

Grimsby equalised on 36 minutes, Charles Vernam with a neat finish at the back post. Vernam ‘s strike came against the run of play but visibly lifted the Mariners and it needed a goal line clearance from Hoskins to prevent Jake Hessanthaler turning the game around immediately.

It had been a remarkable couple of minutes but the Cobblers nearly re-took the lead just before half-time, McKeown pulling off a terrific save to keep out a Williams header.

Shay Facey replaced Jordan Turnbull following a quiet start to the second half. Daniel Powell came on for Williams in the Cobblers second change.

Kevin van Veen curled in a free-kick from 20-yards to put the Cobblers back in front with just over fifteen minutes to play, the Dutchman finding the bottom right-corner with a superbly taken set-piece.

Parity was once again restored six minutes later, substitute Harry Cardwell turning the ball home from close range after the Cobblers failed to clear Ben Pringle’s initial free-kick. Another Mariners substitute, Ahkeem Rose, then had a chance to put Grimsby in front for the first time only to head over the bar.

Grimsby’s Danny Collins was shown a straight red card after bringing down van Veen when the striker was clear on goal, van Veen was just wide with the subsequent free-kick. The game then became somewhat fragmented as the points were shared.

Please note that tickets for forthcoming home and away games are on sale, but for the hour before kick off the ticket office will be selling Grimsby Town match tickets only. 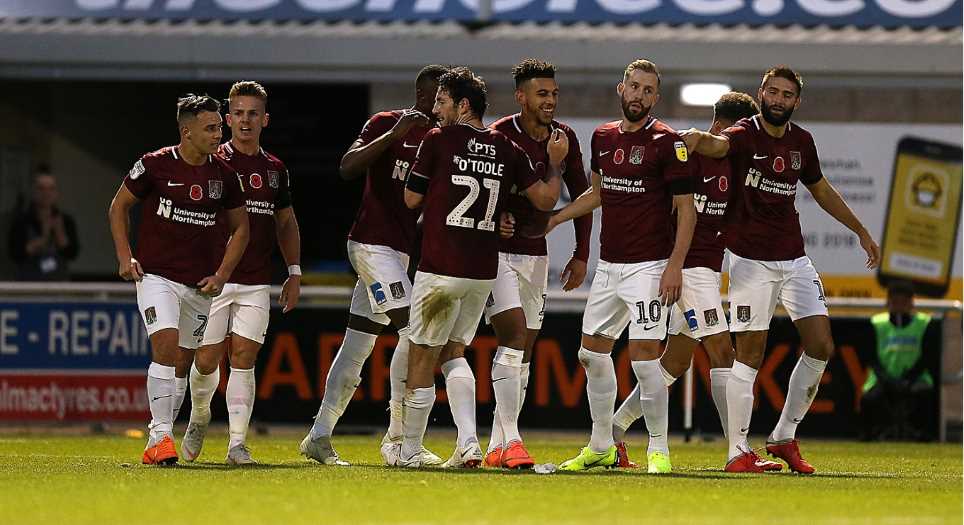 
Tickets for Saturday's game against Grimsby Town at the PTS Academy Stadium (3.00pm kick off) are now on sale from the ticket office and ntfcdirect.co.uk