Sent off:
Cobblers: none
Portsmouth: none

Jimmy Floyd Hasselbaink named an unchanged side for his second game in charge as the Cobblers welcomed Portsmouth to Sixfields on a wet and windy night in Northampton.

Matty Kennedy curled a shot just over from distance and a Matt Grimes free-kick somehow evaded everybody in a fairly quiet opening fifteen minutes.

The Cobblers made the breakthrough on 18 minutes, Burnley loanee Chris Long with a neat side-foot finish having been played in by academy graduate Shaun McWilliams.

McWilliams' night was prematurely ended minutes later when he had to leave the field on a stretcher after picking up a serious looking injury. Yaser Kasim his replacement.

Matt Crooks doubled the Cobblers lead from close range on 35 minutes, Matt Grimes free-kick causing all sorts of problems for Luke McGee and the Pompey defence.

Portsmouth tried to rally and almost halved the deficit when a header back from Ash Taylor, under pressure from Brett Pitman, struck the post. Stuart O’Keefe was then denied by a finger-tip save from Matt Ingram deep into first half stoppage time.

Kenny Jackett’s side pulled a goal back early in the second half, Matty Kennedy scoring from the edge of the area.

Daniel Powell came on for George Smith in the Cobblers second change of the night before Jamal Lowe went close for Pompey.

Chris Long restored the Cobblers two goal lead on 70 minutes, his second goal of the game a confident finish at the back post following a ball in from Brendan Moloney.

Ingram made a superb point-blank save to deny Pompey centre-back Christian Burgess and the Cobblers keeper soon followed that up with a tremendous diving stop to keep out a shot from Stuart O’Keefe.

There was no way back for the visitors though as the Cobblers recorded back-to-back victories, making it the perfect first week in charge for new boss Jimmy Floyd Hasselbaink.

Please note that tickets for forthcoming games and season tickets are still on sale, but for the hour before kick off the ticket office will be selling Portsmouth match tickets only.

As part of increased security measures, a 100% search policy will be in operation. Because of this, supporters are advised to arrive as early as possible.

Three points isn't the only priority on Tuesday, making sure everyone goes home safe is the most important result. 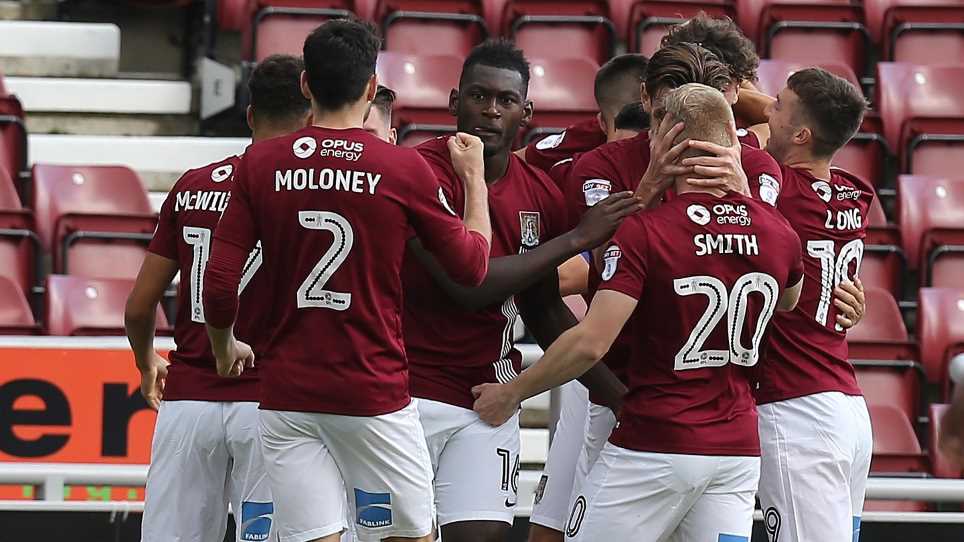 
Tickets for Tuesday's game against Portsmouth at Sixfields are now on sale from the ticket office and www.ntfcdirect.co.uk