New Cobblers boss Jimmy Floyd Hasselbaink says he wants the Northampton Town supporters to be excited about the future, but for the players it is a case of one step at a time.

He will take charge of the Cobblers for the first time on Saturday when Doncaster Rovers visit Sixfields (kick off 3pm) and says the squad should look no further ahead than that game.

“You have to have dreams in life but right now I think we need to stop dreaming and focus on the reality," he said.

"First we need to get ourselves out of the situation we are in and then we can build step by step.

“Saturday is the first opportunity for us to start doing that and hopefully we can.

“There is a long way to go in the season but we are where we are and we need to try and climb the league that has to be our aim first.

“It’s about winning as many football matches as we can and we want to be successful.

“Hopefully we won’t have difficult times but if we do that’s when we need to stick together and find a way forward.

“Every job is different and you have to adapt and be flexible. Burton was a different job with a different group of players and we have to find the best way forward for this group.

“I have a certain philosophy and I like my teams to play attacking football but we have to look at what is the best for this team.

“If that is playing with a certain system the time being then we will do that but to be successful you need to be flexible as well.”

Sent off:
Cobblers: none
Doncaster: none

Doncaster Rovers were the visitors to Sixfields as Jimmy Floyd Hasselbaink took charge of the Cobblers for the first time.

Matt Ingram, signed on-loan from QPR on transfer deadline day, made his debut in goal while summer signing George Smith made his first start for the club. Doncaster included two former Cobblers loanees in their starting line-up, John Marquis and Matty Blair.

The Cobblers got off to a terrific start and had the lead through Matt Crooks after 21 seconds, George Smith providing the set up with a pacy run and ball across to Crooks who finished neatly.

Alex Revell had a shot blocked and Brendan Moloney dragged an effort wide as Hasselbaink’s side continued to play with real energy and at a high tempo.

After a lengthy stoppage when one of the assistant referees had to be replaced by the fourth official because of injury, Ash Taylor made a vital interception to rob John Marquis. Doncaster were being given no time on the ball with the Cobblers players quick to harry and close down the opposition.

Andrew Butler blocked a shot from Crooks and the same player almost made it 2-0 after getting on the end of a cross from Chris Long, his diving effort going just the wrong side of the post.

Joe Wright had a chance to level for Doncaster early in the second half but put his header over.

A vital block from David Buchanan denied Rovers substitute Alfie May and Matt Ingram made a fine save to keep out a header from Tommy Row amidst a flurry of corners for the visitors.

Goalscorer Matt Crooks left the field to a standing ovation as Marc Richards came on for the final fifteen minutes.

James Coppinger drew a save from Ingram before the Cobblers were denied a penalty when Rowe appeared to bring down Waters. Daniel Powell replaced George Smith in the Cobblers final change, Smith also receiving a tremendous reception from the fans on his full Cobblers debut.

Another fine save from Ingram preserved Town's lead going into the 90th minute and they saw the game out to make it a winning start for Jimmy Floyd Hasselbaink.

Please note that tickets for forthcoming games and season tickets are still on sale, but for the hour before kick off the ticket office will be selling Doncaster Rovers match tickets only. 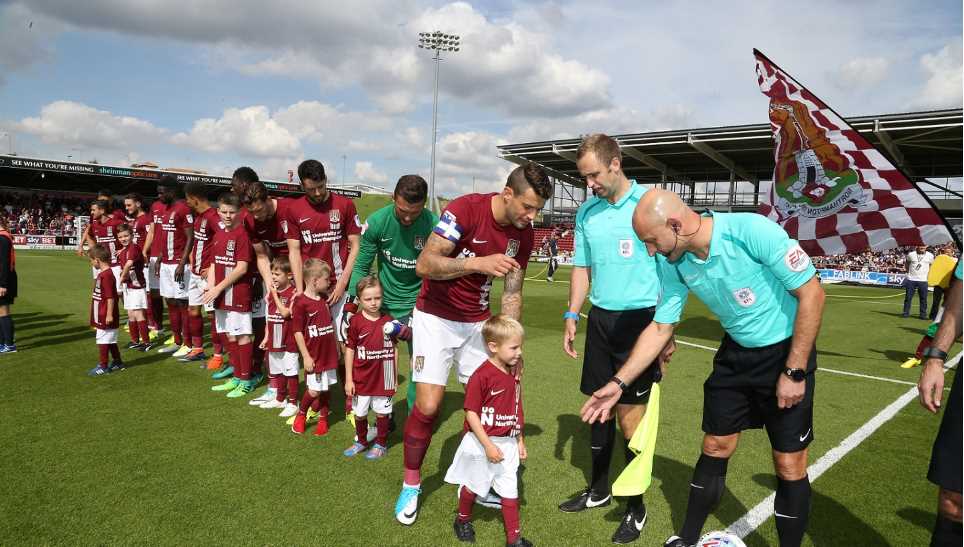 SECURE YOUR TICKETS NOW FOR THE VISIT OF DONCASTER ROVERS!


Tickets for Saturday's game against Doncaster Rovers at Sixfields are now on sale from the ticket office and www.ntfcdirect.co.uk