After three successive away games, Jimmy Floyd Hasselbaink is looking forward to being back at Sixfields as he prepares for Saturday’s home game against Bristol Rovers.

“We’ve got two home games now and it will be nice to play in front of our own fans again,” he said.

“Bristol Rovers are a good team and they have got some really good passers in the middle of the park.

“It will be a good game and we have to make sure that we are right.

“We have to be positive, be disciplined but make sure that we attack Bristol and hopefully the result will come with that.

“We have been doing well in terms of performances and we are heading the right way but we want results.

“We are in the results business but I believe if you keep on doing well then you will get results.

“I want us to score more goals, you have to keep making those runs and be willing to get hurt.”

After a midweek trip to Peterborough United in the Checkatrade Trophy the Cobblers returned to league action with Bristol Rovers the visitors to Sixfields in the first of back-to-back home games for Jimmy Floyd Hasselbaink’s side.

The Cobblers were still without a whole host of players due to injury but Sam Hoskins (ankle), Shaun McWilliams (foot) and Regan Poole back from international duty with Wales under 21s were all named on the bench. Goalkeeper Sam Slocombe got the nod ahead of ex-Sixfields number one Adam Smith for Rovers who also included another former Cobbler in their starting line-up, Billy Bodin.

Matt Ingram made a terrific early save to deny Rovers forward Rory Gaffney and Tom Broadbent headed over in a bright start for the away side. Marc Richards flicked a header wide from the first Cobblers corner of the afternoon.

Rollin Menayese had to be alert to clear the danger following some good play from Sam Foley and Dean Bowditch as the Cobbblers started to get on top.

A deflected shot from Matt Grimes forced another in a succession of Cobblers corners before Bodin saw a shot parried by Ingram on the break. Another good stop from Ingram kept out an effort from Ellis Harrison as Rovers enjoyed a spell of pressure.

Richards did well to hold off Menayese before slicing a shot wide from 20-yards and Liam Sercombe saw a shot destined for the top-right corner saved by Ingram, both sides continuing to create chances in an open and entertaining first half.

Bristol Rovers took the lead on 38 minutes, Billy Bodin scoring with a shot from just inside the box. Bodin, having picked up an injury in scoring the goal, was then replaced by Tom Nichols. The Cobblers made a change of their own soon after, Regan Poole coming on for Brendan Moloney.

Rovers were awarded a penalty on 42 minutes when Alex Revell tangled with Tom Nichols. Nichols stepped up to take the penalty himself but a superb save from Ingram kept the scoreline at 1-0.

Revell fired wide from Richards lay-off at the start of the second half while at the other end Joe Partington spurned a headed chance for Rovers.

Ellis Harrison doubled Rovers lead on 56 minutes, heading in at the far post from Sercombe’s cross.

Lewis McGugan came on for his home debut in the Cobblers second change, replacing Sam Foley just before the hour mark.

Harrison made it 3-0 on 61 minutes, his second of the afternoon a neat strike into the bottom corner.

The off-side flag denied Richards a goal as the Cobblers looked for a way back into the game, Bowditch having created the opening. Northampton Town's already difficult task was made even harder on 68 minutes when Alex Revell was shown a straight red card by referee Mark Heywood after a clash with Rovers defender Tom Broadbent.

Rory Gaffney made it 4-0 on 72 minutes, snaffling up the chance from close range after Chris Lines' initial strike had come back off the post.

The afternoon got worse for the Cobblers when Liam Sercombe made it 5-0 with a volley and substitute Dominic Telford turned in Marc Bola’s cross to make it six.

Please note that tickets for forthcoming games and season tickets are still on sale, but for the hour before kick off the ticket office will be selling Bristol Rovers match tickets only. 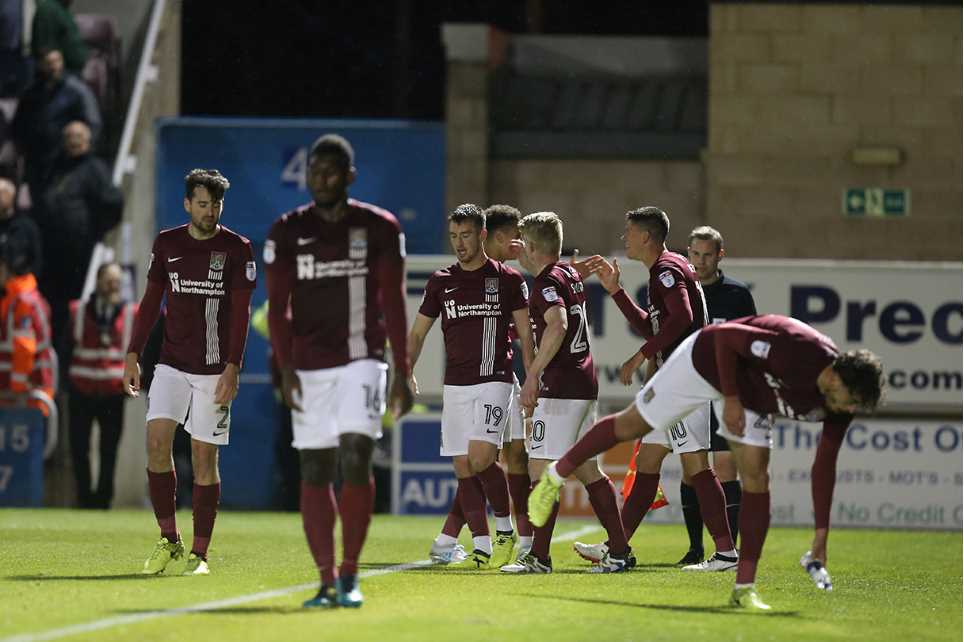 
Tickets for Saturday's game against Bristol Rovers at Sixfields are now on sale from the ticket office and www.ntfcdirect.co.uk