Booked:
Cobblers: Ash Taylor (55, 1st of the season)
Scunthorpe: none

Sent off:
Cobblers: none
Scunthorpe: none

Midfielder Matt Grimes was back from a one-match ban as the Cobblers and Scunthorpe met for the third time in a fortnight. Alex Revell (groin), Aaron Phillips (thigh) and Sam Hoskins and Daniel Powell (both hamstring) were all still unavailable for selection.

Matt Crooks headed just wide from a Billy Waters cross in the Cobblers' first chance of the afternoon while Waters had a shot saved by Matt Gilks. The Scunthorpe keeper then recovered from a fumble to keep out a powerful effort from Grimes.

The Cobblers were growing into the contest and John-Joe O’Toole also went agonisingly close with a header.

Hakeeb Adelakun made a good run but dragged his shot wide and David Buchanan made a terrific goalline clearance to deny Duane Holmes who looked set to open the scoring.

With the first half nearly over, the Cobblers were dealt an injury blow when John-Joe O’Toole had to be replaced by Sam Foley.

Scunthorpe started the second half on top, Holmes having a shot deflected behind and Matt Ingram saving well from Jordan Clarke.

Cameron Burgess broke the deadlock on 56 minutes, getting the final touch to a ball across the box from Adelakun.

Chris Long fired over following a neat flowing move from the Cobblers involving Buchanan, Crooks and McGugan but Scunthorpe increased their lead on 74 minutes, Duane Holmes rounding Ingram to slot home his second of the afternoon.

Substitute Dean Bowditch saw an effort well parried by Gilks and Ash Taylor headed wide from a McGugan corner in stoppage time but there was to be no consolation goal for the Cobblers as their three-match winning run in the league came to an end.

Please note that tickets for forthcoming games will be on sale, but for the hour before kick off the ticket office will be selling Scunthorpe United match tickets only.

As part of increased security measures, a 100% search policy will be in operation. Because of this, supporters are advised to arrive as early as possible. Turnstiles will be open from noon. 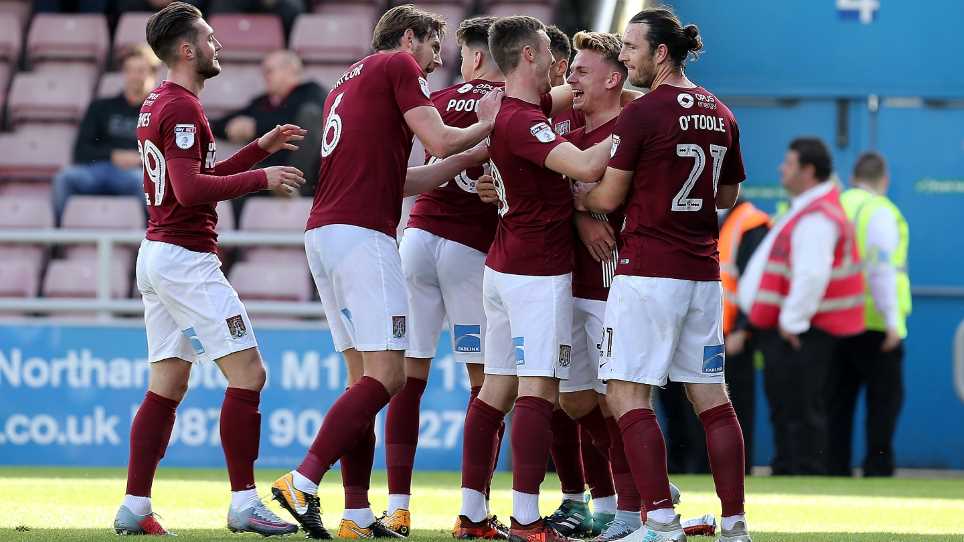 TICKETS NOW ON SALE FOR THE VISIT OF SCUNTHORPE UNITED


Tickets for Saturday's Sky Bet League 1 game against Scunthorpe United at Sixfields (3pm kick off) are now on sale from the ticket office and www.ntfcdirect.co.uk