New signing left-back Joe Bunney came straight into the side for the visit of MK Dons with Jordan Turnbull moving across to partner Ash Taylor at centre-back. Nottingham Forest winger Gboly Ariyibi, re-called from a loan spell at MK Dons earlier in the week before being loaned out to the Cobblers, was named on the bench.

Just two places and one point separated the two sides before kick-off with the Cobblers knowing a win would lift them out of the relegation zone.

Matt Grimes had the first effort of the afternoon for the Cobblers, his curled free-kick palmed away by Lee Nicholls.

The Cobblers took the lead on 16 minutes, John-Joe O’Toole with a near post finish after some great work down the left from Sam Foley led to debutant Bunney providing the cross for O’Toole’s third goal in as many matches.

MK Dons were soon back on level terms however, Osman Sow crossing for Alex Gilbey to smash home and, despite some appeals for a foul on Ash Taylor in the build-up, the goal stood.

Sow spurned a good chance and Richard O’Donnell saved a rising effort from Scott Wootton as the Dons enjoyed a spell of pressure.

Chris Long put the Cobblers back in front before half-time, the striker stretching out a leg to get the final touch to a Sam Hoskins cross.

Peter Pawlett flashed a shot just wide for the Dons at the start of the second half before Jimmy Floyd Hasselbaink introduced Hildeberto Pereira in place of Hoskins.

Pereira combined with Long to almost set up a chance for 3-1, Dons defender Callum Brittain somewhat fortunate not to put through his own net. Matt Crooks then also went close with a right-footed curler.

Gboly Ariyibi came on to make his debut with just under twenty minutes to play, the Forest loanee replacing Sam Foley.

Long volleyed over from close range as the Cobblers looked to put the game to bed. Ike Ugbo went down in the area in a bid to win a penalty and a fantastic save from O’Donnell to keep out a bullet header kept the Cobblers in front as the Dons rallied in a bid to snatch a late point.

Dons substitute Chuks Aneke was shown a straight red card in stoppage time after appearing to throw a punch at O'Toole but the Cobblers kept their nerve, O'Donnell saving a Marcus Tavernier free-kick to seal the three points and a third consecutive win.

Sixfields is heading for a large crowd on Saturday when Northampton Town welcome Milton Keynes Dons for a 3pm kick off.

The Cobblers know a win would take them out of the bottom four, while the Dons know that three points would put further distance between themselves and the danger zone, so there is plenty to play for.

Supporters have been getting behind the #selloutsixfields campaign, and a large attendance is certain, but tickets do remain on sale and it is expected they will be available on arrival.

Please visit the main ticket office if you are looking to purchase tickets.

Please note that tickets for forthcoming games are still on sale, but for the hour before kick off the ticket office will be selling MK Dons match tickets only. 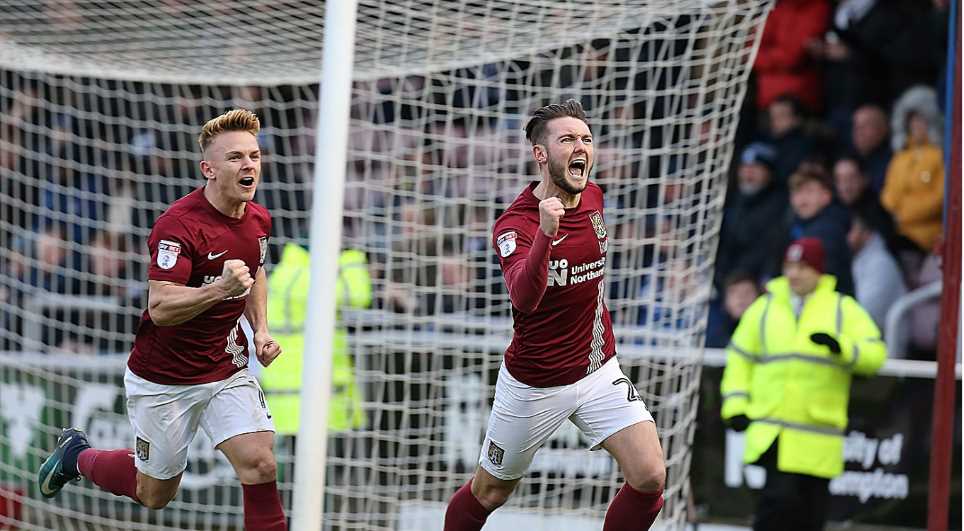 TICKETS NOW ON SALE FOR SATURDAY'S GAME WITH MK DONS


Tickets for Saturday's game against the MK Dons at Sixfields (3pm kick off) are now on sale from the ticket office and www.ntfcdirect.co.uk